We are delighted to offer the Anti-Varus My Generation by Schein footwear collection for children. This Anti-Varus footwear range is suitable for use in children who have club feet. Club foot is a term used to describe a range of foot abnormalities present at birth. The ankle is twisted, the foot points down and inwards and the soles of the feet face each other.

The Anti-Varus range can also be used in the correction of adducted feet (pes adductus). This a deformity of the foot that results in inversion so that only the outer side of the sole rests on the ground.

The anti-varus shoe works by using three correction points, that can be useful in the treatment of club feet and adducted feet. 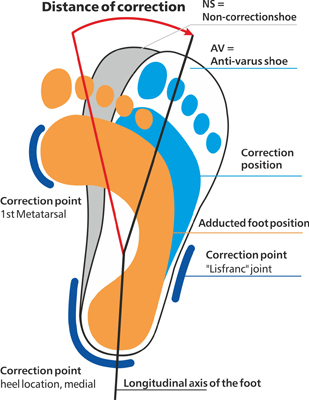 1. The posterior foot is held upright by a full length heel cap which prevents torsion effects in the ankle during the necessary forefoot correction.

2. The lateral pressure at the cuboid (bone in the foot located roughly at the midpoint of the outer side of the foot) corresponds to the supporting point aroudn which the forefoot is forced into the correction position.

3. The third correction point is to be found at the front, medial, on a level with the proximal joint (start) of the big toe. Here the foot is prevented from returning into the defective position. There is an indication for anti-varus shoes when treating children who are walking and have adducted feet or club foot.

4. Correction comes into effect at a lateral axis deviation of at least 8°.

All prices are in EUR.